Production
Pure lavender essential oil is produced through steam distillation. This generates a greater amount of oil compared to other methods due to reduction of polar compound loss. Harvest of lavender blooms are typically around June. Lavender flowers are compacted into a still. Fewer air pockets in the still result in greater oil yield. A boiler is then used to steam the bottom of the lavender flower filled still at a very low pressure. The lavender flower pockets containing oil are broken from this heating process and a pipe of cold water is run through the center of the still. The hot lavender oil vapor condenses on the cold pipe with the cold water and is collected into a holding tank where it is allowed to settle. Due to polarity and densities of the water and oil, these two will separate in the holding tank whereupon the water is piped out, leaving just lavender essential oil.
Uses
Lavender oil has long been used in the production of perfume. Oil of spike lavender was used as a solvent in oil painting, mainly before the use of distilled turpentine became common. Lavender oil is used in massage therapy as a way of inducing relaxation through direct skin contact for application. Lavender oil is a common ingredient in mosquito and other insect repellents. In aromatherapy, lavender oil produces a significant decrease in performance of working memory and impaired reaction times for both memory and attention based tasks compared to healthy controls using a CDR System. Self-reported anxiety and stress levels were decreased following aromatherapy sessions. While physiological stress factors vary from person to person, aromatherapy results in a significant decrease in stress and anxiety levels in patients.Lavender oil is a potential treatment for agitated behavior in patients with dementia through application via aromatherapy. 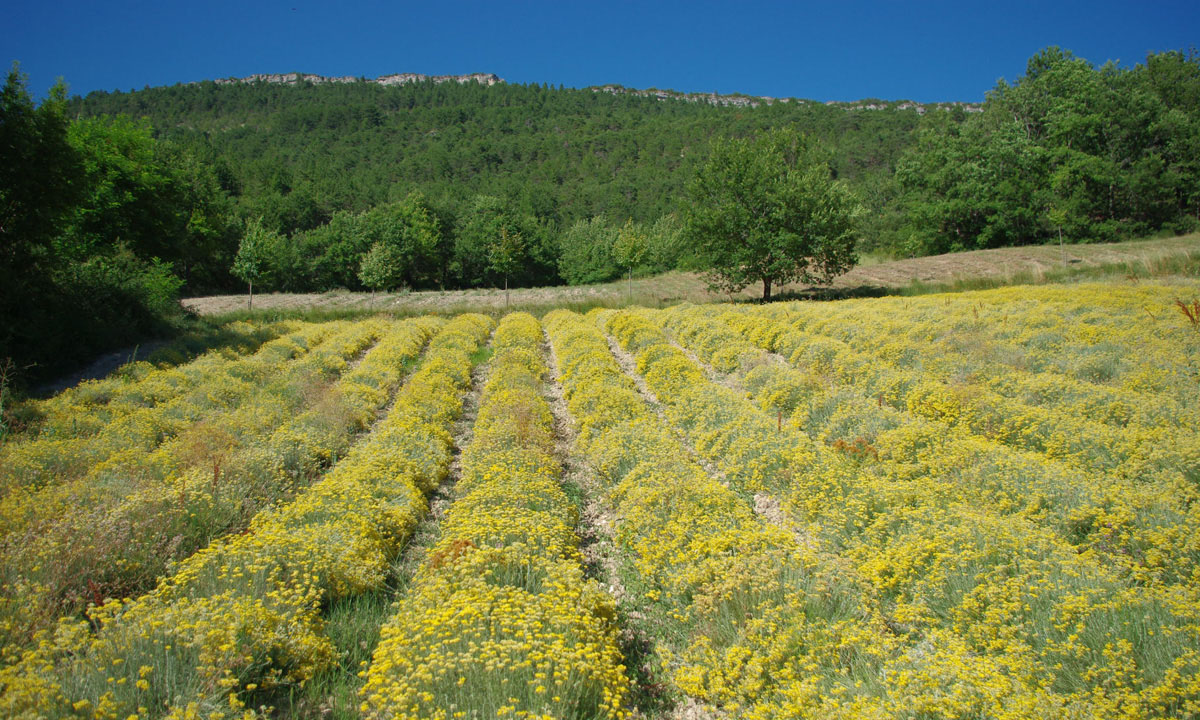 The name Helichrysum derives from the Greek "helios", which means sun and "chrysos" - gold, because of the color of the flowers. Helichrysum is also known as "immortal" and "eternal herb".
Helichrysum italicum is a flowering plant of the daisy family Asteraceae. It is sometimes called the curry plant because of the strong smell of its leaves. It grows on dry, rocky or sandy ground around the Mediterranean. The stems are woody at the base and can reach 60 centimetres (24 in) or more in height. The clusters of yellow flowers are produced in summer, they retain their colour after picking and are used in dried flower arrangements. Helichrysum italicum acts as a natural antimicrobial and anti-inflammatory agent. Essential oil contains special properties that make it antioxidant, antibacterial, antifungal and anti-inflammatory. Some of its most popular uses are to treat wounds, infections, digestive problems, nervous system maintenance, and cardiac health and curative respiratory diseases. It soothes burns and raw chapped skin. It is used as a fixative in perfumes and has an intense fragrance. This plant is sometimes used as a spice. Although called "curry plant" and smelling like curry powder, it has nothing whatsoever to do with this mixture of spices, nor with the curry tree (Murraya koenigii), and is not used as masala for curry dishes either. Rather, it has a resinous, somewhat bitter aroma reminiscent of sage or wormwood and is used like these: the young shoots and leaves are stewed in Mediterranean meat, fish or vegetable dishes til they have imparted their flavor, and removed before serving.